Hey there!  Welcome back to not only the last day of the April release for Lil’ Inker Designs but my last day as a designer for this amazing company!  You should’ve arrived from Laura’s inspiring blog, which is where you can also head for the full list of the dynamic design team!  After you’re finished here, you can follow on to Amazing Amy!  Don’t forget to comment along the way for your chance at one of three $15 gift certificates to the store.

As my last card, I wanted to say ‘Thank You’ to Lil’ Inker Designs, Laura and the Dream Team that she has put together.  It’s been so wonderful being part of such an incredible group of talented and motivated women!

This card uses some of my favorite goodies!  The new Quilted Stitched Pattern die is a must.have!  Laura is having a little contest about naming this die, so you should definitely check that out!  Like I said before, this die is the perfect backdrop on a card.  I used more of the flowers and leaves from the Frames & Flowers die set along with the Modern Mehndi stamps and dies.  The sentiment is from the new stamp set, Quick Notes.  This font is so versatile!  I love the little distressing in it too – adds just the right touch!

Thanks so much for stopping by and supporting all my time with LID!

The new Frames and Flowers is such a fun new set of dies!  Not only do you get the amazing frame but the piece that pops out has the fabulous stitching as well, so it’s really two in one!  I chose to use the frame to make a shaker card

A lighter pink frame was adhered to the card base first to allow me to center my sentiment correctly and add foam tape to create the pocket of sparkle and shine.  The sentiment is from Shiny Happy Sentiments and is embossed on the card base.  I added a little extra shine with the Wink of Stella glitter pen to the circles inside ‘Sparkle’.  The frame is cut out of an embossed piece of Bazzill cardstock and backed with a recycled piece of acetate.

The inside is filled with microbeads, sequins and even some flower shaped rhinestones.  Super fun and sparkly!!  The flowers are from both the new Frames and Flowers and Spring Flowers.  They compliment each other so well!

That’s all for today!  Don’t forget to comment along the hop!  Thanks so much for stopping by,

Welcome to the April release hop for Lil’ Inker Designs!  This is a release hop - you should’ve arrived here from Laura’s fabulous blog if you’re hopping along the entire hop.  Before I get started though, I thought you should know that this will be the last hop for me with Lil’ Inker.  I’ve decided to step down from the team and focus my brain on my business.  (I recently inherited the family business after moving it across the state.)  I’ll be taking a bit of a crafty break to build the store and recharge my mojo.  I’ve loved working for Laura and Lil’ Inkers!!  I couldn’t have asked for a better ‘boss’!  Thank you for giving me this fabulous opportunity!  Ok, on to today’s card

Lots of new and old LID dies on this one!  To begin, I cut the new Quilted Stitched Pattern die onto the card face.  Umm, I LOVE this die!  It is the perfect background to me – not to fussy, not too understated, just right!  The pattern paper rectangle is cut with Stitched Mats Rectangles.  I wanted a thinner one though, so I cut it and then slid the paper to the desired width and cut again.  The stitching doesn’t meet up perfectly, but with this busy of a pattern you don’t notice unless I tell you to look…so don’t! ;)  Next up is one of the new Glassine Envelopes – perfect for a little lunchbox note, goodies or to hold a tag like I did here.

The Anytime tag is stamped with a super cute sentiment from the new stamp set, You’re My Favorite, and adorned with the flowers from the Frames & Flowers die set.  I attached a duplicate of the flower and leaf cluster to the front of the envelope to hide the foam dot.  One last little detail of the Mom word die across the layout finishes it off!  WooHoo!  One of my mother’s day cards done early!

Your next stop on this hop is Amazing Amy!  Don’t forget to comment along the way for your chance at three $15 gift certificates to Lil’ Inker Designs!! Thanks for stopping by!

I have a very favorite poppy stamp that I’ve used a ton.  Instead of boring you over the next several weeks with the same stamp over and over, I thought I’d just post them all in one post.  This first one is a “Do Over” from a card I made here.  I didn’t love the layout of the card.  I was also in need of a birthday card, so I ripped that one up and repurposed it here.

The lighter background showcases the red of the poppies better.  This image was embossed on kraft paper, painted with bleach and colored with Copics.  As was the next one, except for the fact that it was colored with pencils instead.

This one was for a publication submission, hence the stark background.  It was rejected, unfortunately, and still sits awaiting the perfect gift to be stuck inside the bag.  It’s hard for me to not go back and add more color to the flowers…hmm, maybe I’ll do that now!  Ha!

This next one was created while playing with the metallic watercolors I’ve used recently.  The splatter background is so big right now as is gold.  So I swirled the brush in the gold paint and flicked the paintbrush to get the splatter.  Let me tell you, this is probably not the best technique, as I ended up with paint on my face, the wall in front of my desk, the dies and whatnot scattered on my desk, etc.  After splattering, I decided to use the poppies for a sympathy card.  Poppies are a symbol of remembrance after all, so it just felt right.

I hope the splatter doesn’t come across as too free and artsy for a sympathy card.

The gold is really pretty and showed through the Copic coloring.  Thanks for stopping by today!  Hope your week is marvelous!

Hey all!  Lil’ Inker Designs is sponsoring this weeks Runway Inspired Challenge, and I couldn’t help myself – I just had to play along!

I also found myself in need of a birthday card, so I pulled out a set that I didn’t use from the latest LID release, Spot On Spring.  Perfect timing too since the challenge this week at Simon Says Stamp is Happy Birthday!

I used some old gridline paper to create a colorful, busy pattern inspired by the RIC challenge image.  The best thing about this set is that it’s a companion to the Darling Diamonds and Spot On sets!  Perfect when I needed a gray to ground all the color.

The colors are all Hero Arts – Pale Tomato, Fresh Peach, Mint Julep, Soft Pool & Soft Granite.  The On the Diagonal die left the perfect spot to add a big focal sentiment.  It also kind of mimics the LOVE word bubble with the dark line following it on the dress.  It is pieced from Spot On Spring and Sugar Kissed Cottage: Surprise!  I use that birthday sentiment a ton because of it’s size and will be using it even more now.  Don’t you just love the mixture of the fonts?! 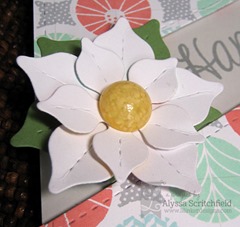 I can’t get enough of the Spring Flowers dies.  I simply adore that flower shape!  The button center doesn’t have a flat back though, so I had to punch holes in the flower centers to fit it through.  I fluffed up the petals by scoring along the stitch line and folding them a bit.  One last addition is a sweet little vellum butterfly with baker’s twine antennae from the new Stitched Butterflies.

Thanks for bopping on by!  Hope you’re all having a wonderful week! 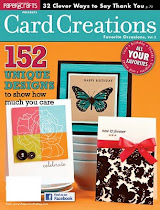